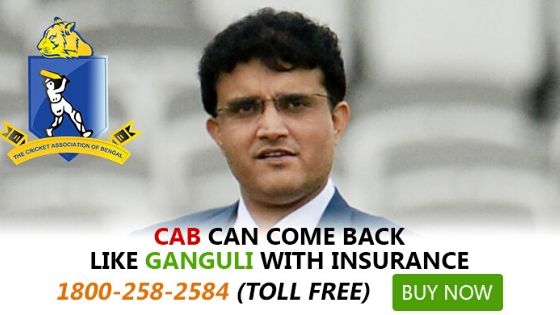 BCCI is not only keeping on expanding its operation across the country, at the same time they are making sure that its employees, players along with domestic and international tournaments and match officials are taken well care of. This is evident from the insurance covers that the Board avails every year.

Among the myriad of policies that BCCI has secured so far, the ‘revenue cover’ is the most talked-about plan. For a cover worth a staggering Rs. 2041 crore BCCI paid Rs. 7.38 crore on premium.

The chief objective behind opting for such a massive revenue cover is to avoid losses due to cancellation of cricket matches and other events. Probably, the rain-disturbed opening ceremony of IPL triggered the necessity of such a cover.

However, all state boards operating under BCCI are yet to walk on the path already shown by BCCI. CAB, the Cricket Association of Bengal is a stark example in this context.

The third and last T20 between India and South Africa was abandoned because of wet outfield on 8th October, 2015 at Eden Gardens. The incident raised an old question again about the preparation of the grounds men since the ground wasn’t entirely covered in spite of the forecasts for heavy downpour.

Traditionally, Eden Garden has an appalling record when it comes to management of ground. Over the past three years, we witnessed similar situation at least four times before. The latest washed –off match was match between Rajasthan Royals and KKR on April 26, 2015 in the IPL 8. In order to improve on such a dreadful tradition, the BCCI sent a mail to the CAB to renovate the outfield and enhance Eden’s drainage system before the upcoming World T20 in 2016 according to a report by The Indian Express. However, the situation hasn’t significantly improved as of now. Inefficiency in covering the outfield properly coupled with the lack of insurance cover is hurting BCCI dearly.

But, Sourav Ganguly, the CAB's president made clear that there is no issue with illustrious ground. According to him, the only issue was with covering the ground; especially the outfield and that he assured that performance of grounds men would be more efficient consequently. Ground facilities and drainage system are flawless at Eden Gardens according to him.

Well, even if we consider his statement right, it doesn’t hide the loss that CAB suffered due to the calling off of the match. Board of cricket association had to refund the ticket sales amount which could well be in crores. Had CAB secured an insurance policy like the above-mentioned ‘revenue cover’ such a massive could be avoided.

Uttar Pradesh Cricket Association did not make the mistake that CAB committed earlier this month. UPCA availed an insurance policy prior to the first ODI that took place on 11th October. This comprehensive insurance cover of Rs. 6.5 Crore was provided by Oriental Insurance. The policy covers match cancellation due to rain like what happened in Eden Gardens. Aside from rain, other natural calamities like fire, flood and earthquake are also covered under the plan along with all possible eventualities such as terrorism. UPCA wouldn’t face any loss like CAB did face even if the match couldn’t get underway.

This is a one of a kind insurance policy and in recent times it is becoming highly sought-after as an increasing number of sports organizations are availing this policy to cover sporting events. It is high time that CAB and other organisations pertaining to various sports pick such policies and avoid financial beating. Online insurance comparison portals like GIBL are tied up with all leading insurance companies operating in India. So, sports regulatory bodies just have to convey their requirements and get the right and the most cost-effective insurance cover right from the portal of GIBL without any hassle.